On Leap Day this year,my mother-in-law passed on from this life and went to be with her Savior.  It was only 7 hours from the time I heard the news that she was going to the hospital and to the news that she had passed away. My sister-in-law Becky texted all of her siblings and their spouses to let us know that when she went by to visit her mother that she was disoriented and not feeling well so Becky called 911 and Mom was transported to the hospital.  At the time we thought she was dehydrated because Mom had thought she had a stomach bug and hadn't eaten or had much to drink prior to when Becky came to visit.  But as time went on the prognosis was not good.  Mom had had a heart attack sometime after the paramedics came and they were able to resuscitate her. The doctors did find that she was bleeding in her abdomen and immediately began prepping for surgery. However, as they prepped, they realized that they wouldn't be able to repair the bleeding artery and that my husband's mother was dying.  We received another text minutes after Hubby came home from work saying that the doctors recommended everybody come to the hospital. Within 15 minutes my husband was changed out of his work clothes, grabbed some food, hustled out the door and drove 45 minutes to be with his family.  Around 11pm that night, I received a text from my sweet husband telling me his mother had died.  I cried.

It happened so fast and it was so unexpected.  The grief that surrounded us was numbing and the all of it seemed surreal. This could not be happening.  But it did happen. My husband had lost his mother and my children had lost their grandmother.

I was lucky and blessed to have had a wonderful mother-in-law.  She accepted and welcomed me into the family. My husband is the youngest of five and the last one to be married.  My mother-in-law treated me as if I was one of her own children. She shared her love of books and her strong faith with me.  She introduced me into Diana Gabaldon's Outlandish world and she prayed for me during my conversion into the Catholic faith.  She came to the hospital after the birth of each of my children, usually being one of my first visitors. She and Dad came with flowers and arms ready to hold small bundles of joy.  She cherished each of her 22 grandchildren and did all she could to spend one-on-one time with each one for their birthdays.  Mom loved being a grandmother and she was good mother-in-law.

As the days slipped by one by one, my husband and I were gripped with a grief like we had never felt before. Life seemed much more vulnerable and fragile.  My husband grieved silently and spent many days with his siblings and his father preparing funeral arrangements. After a few days he spoke and shared his version of what he saw and experienced in those final hours.  My heart broke again. It was difficult to be strong for him and keep up with daily routines for our children while I also grieved.  My husband is an amazing man. His strength and tenderness are incredible.  He wrote and shared his eulogy at the funeral.  He mourned. He grieved. He met each day getting by one hour at a time.  His grief encompassed him and I felt like there was nothing I could do to ease his pain or his grief.

I was touched to be asked to be one of mom's pall bearers during the funeral.  I cried as I, my brothers-in-law, and my sister-in-law walked Mom down the aisle towards the front of the church.  My sweet baby took tissues and wiped my face when I came to our pew.  My husband gave his eulogy during the wake.  My sister-in-law Mary sang and cantored the funeral service. Every person in our family had a part in the funeral service.  My two youngest greeted the visitors.  My big kids handed out programs. My oldest brought up the eucharist with his cousins.  My in-laws and husband walked Mom up and down the aisle for the wake.  We all had a part. We were all included. Every grandchild was given a part to be a part of their grandmother's exit from the physical world.  It was humbling, loving, inclusive, and sad. And sad doesn't even begin to cover it.

When my family embraced our grief and accepted it, it was then that we were able to move on.  It doesn't mean we don't greet each day with a bit of sadness.  It meets us at unexpected times.  It comes over us.  It passes over us. It kisses our cheeks. And then it slides away, but it doesn't go far. It's always there. It lingers.  Through this sadness my husband and I have clung to each other a little more tightly. The kisses goodbye when he leaves for work are more tender. Our hugs are a little tighter. We say "I love you" in greeting and in passing.  We hold hands a little longer. We snuggle in a little closer on the couch.  All in the effort to remind each other that we are together, that are we there for each other, and that we are doing this life together.

We feel more vulnerable. More exposed. More fragile.  So therefore, we hold on a little tighter.

1 Thessalonians 4:13-18  “Brothers and sisters, we do not want you to be uninformed about those who sleep in death, so that you do not grieve like the rest of mankind, who have no hope. For we believe that Jesus died and rose again, and so we believe that God will bring with Jesus those who have fallen asleep in him.  According to the Lord’s word, we tell you that we who are still alive, who are left until the coming of the Lord, will certainly not precede those who have fallen asleep.  For the Lord himself will come down from heaven, with a loud command, with the voice of the archangel and with the trumpet call of God, and the dead in Christ will rise first.  After that, we who are still alive and are left will be caught up together with them in the clouds to meet the Lord in the air. And so we will be with the Lord forever.  Therefore encourage one another with these words.” 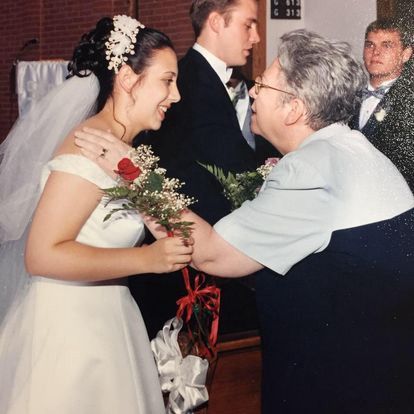 Image by Drew Farwell on UnsplashI have been running for about 8 years.  Maybe longer. The time is starting to
Sep 15, 2020
2 min read
Sep
04

When the pandemic hit, I was busy going breast cancer diagnosis and treatment.  I was busy trying to hold it
Aug 19, 2020
2 min read